We synthetically create new materials with exciting new properties using low-dimensional carbon materials as starting reagents. New chemistries and tools are being developed in our laboratory to directly tailor nanomaterials at the electronic and optical levels. In so doing, we have been able to open new research directions and develop technology platforms for discovering fundamentally new phenomena and properties at both the very small length scale and the very large. Examples of our current research include creating molecularly tunable fluorescent quantum defects to understand and control the coupling of electrons, excitons, phonons, and spin with defects in reduced dimensions, establishing the molecular science of carbon, elucidating the fundamental principles that govern the assembly and collective properties of nanostructured solids and networks, and developing novel devices, instrumentation and methodologies to tackle some of the fundamental problems in energy, nanofabrication, quantum science, nanoelectronics, and biomedicine.

1. Molecularly Tunable Fluorescent Quantum Defects. Defects can rule the properties of a crystal. This effect is particularly intriguing in atom-thick materials, such as single-walled 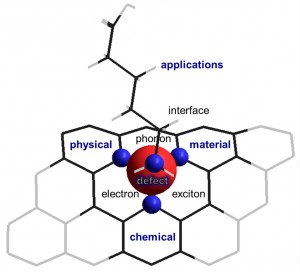 2. Tube^2. Atom-thick materials, such as SWCNTs and graphene, are prone to chemical attack because all of the constituent atoms are exposed. To 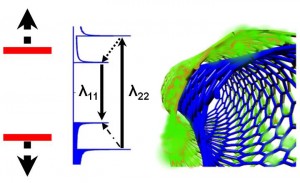 4. Ultra-selective Carbon Network Chemistry. Single-walled carbon nanotubes (SWCNTs) are a class of nanostructured materials that combine remarkable electrical, mechanical, thermal, and optical properties all in one. Unlike other nanostructures such as quantum dots, SWCNTs are (in a sense) molecular in nature. Their fascinating properties are not simply a result of size effects, but originate from an intertwining of the one-dimensional confinement of electronic states with the incredible versatility of how the carbon-carbon bonds are arranged within the tubular network. Within a small diameter range (0.4–2 nm), a SWCNT can have over 150 possible chiral structures, each uniquely indexed by a pair of integers (n,m). For two SWCNTs that differ in diameter by less than 0.01 nm (e.g., [10,10] vs. [11,9]), one has an electrical conductivity rivaling copper while the other is predicted to be a semiconductor with interesting optical properties. This dramatic change of properties with a subtle difference in structure gives rise to a vast new realm of chemistry and physics. However, all current synthetic methods for making SWCNTs yield a complex mixture of all types of nanotubes, and moreover, SWCNTs are virtually insoluble in any conventional solvent. These two problems have held back a host of potential applications and the full establishment of this new branch of molecular science, but they also have persistently challenged some of the limits of nanoscience and nanotechnology from the perspective of chemical synthesis, catalysis, complex mixture separation, metrology, and nanostructure manipulation. To meet some of these challenges, we are developing new materials strategies to eliminate the insolubility problem facing SWCNTs and new methods to effect the separation and manipulation on the single chirality level.
Selected Publications:
“Optically triggered melting of DNA on individual semiconducting carbon nanotubes.” Wang, C.-Y.; Meany, B.; Wang, Y.H.* Angew. Chem. Int. Ed., 2017, 56, 9326-9330.
“Achieving ultrahigh concentrations of fluorescent single-walled carbon nanotubes using small-molecule viscosity modifiers.” Leed, J. D.; Fourkas, J. T.*; Wang, Y. H.* Small 2013, 9, 241-247.
“Acyclic cucurbit[n]uril molecular clips selectively solubilize single-walled carbon nanotubes in water.” Shen, C.; Da, M.; Meany, B.; Issacs, L.*; Wang, Y. H.* J. Am. Chem. Soc. 2012, 134, 7254−7257.
“Outerwall selective alkylcarboxylation and enrichment of double-walled carbon nanotubes.” Deng, S.; Piao, Y.-M.; Brozena, A. H.; Wang Y. H.* J. Mater. Chem. 2011, 21, 18568-18574.
“Diameter-dependent, progressive alkylcarboxylation of single-walled carbon nanotubes.” Deng, S.; Brozena, A. H.; Zhang, Y.; Piao, Y.-M.; Wang, Y. H.* Chem. Comm. 2011, 47, 758-760.
“Confined propagation of covalent chemical reactions on single-walled carbon nanotubes.” Deng, S.; Zhang, Y.; Brozena, A. H.; Mayes, M. L.; Banerjee, P.;Chiou, W. A.; Rubloff, G. W.; Schatz, G. C.; Wang Y. H.* Nature Communications 2011 2:382 doi: 10.1038/ncomms1384.

5. “Seeded Crystalization” of Nanostructures: From Discrete Nanoparticles to Organized Solids. A group of atoms are often not functional until they are made a molecule, and depending on how the atomic building blocks are bonded, their collective properties may be totally different. Will nanostructures behave similarly to atomic building blocks? The ability to assemble isolated nanostructures into ordered solids and functional networks may open a new world. This capability  will also be ultimately required for the realization of many potential applications based on nanomaterials, such as nanoelectronics, quantum wires, photonic crystals, and solar cells. Unlike molecules or atoms, little is known about the fundamental principles that govern the self-assembly and directed assembly of nanostructures. We will approach this problem by making an analogy to crystallization. For example, how does self-assembly nucleate on a surface? Can one plant a “seed” to direct the subsequent assembly? Is it possible to introduce long-range order into a self-assembled system by planting a series of “seeds” that are correlated in space and symmetry? Will this bottom-up approach afford both a packing density far beyond the resolution of lithography and long-range registry that is typically missing in self-assembled systems?