Professor
Department of Chemistry and Biochemistry 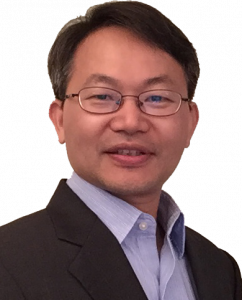 Dr. Wang grew up in a small village in southeastern China but decided to pursue a career in chemistry while at high school reading an article by Richard E. Smalley. He later became one of Smalley’s last graduate students, completing his Ph.D. at Rice University with the support of a 4-year Presidential Fellowship. At Rice, Dr. Wang demonstrated the feasibility of “cloning” single-walled carbon nanotubes and also contributed to the development of the first conductive rival of Kevlar from carbon nanotubes. He did his postdoctoral study with Chad A. Mirkin at Northwestern University, where he co-invented massively parallel molecular printing and, along with George C. Schatz, developed a fundamental understanding of the directed assembly and manipulation of nanostructures through patterned molecular templates.

Since starting at the University of Maryland in the fall of 2008, Dr. Wang and his research group have initiated ambitious new research directions. Two of these directions have turned into exciting new frontiers, including: 1) Quantum Defects (a.k.a. sp3 Quantum Defects or Organic Color-Centers); and 2) Tube^2 (tube-in-a-tube semiconductors). Both quantum defects and Tube^2 are functional nanomaterials initially demonstrated in Dr. Wang’s laboratory and now synthesized in various forms. These novel quantum systems allow his group and a quickly growing community to probe, both experimentally and theoretically, a series of fundamental new phenomena that arise from these versatile synthetic structures. Extending from the fundamentals to applications, they are also exploiting these new properties and chemistries for electrical energy storage, thermoacoustics, biomedical imaging/sensing, as well as energy-saving and quantum technologies. Particularly, his research group has recently made breakthroughs in developing methodologies/technologies to enable single defect spectroscopy in the shortwave infrared, quantitative infrared measurements, and dynamic gating of infrared radiation in a textile that allows for adaptive self-regulating thermal radiation and heat exchange through the fabric.