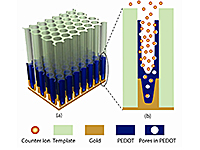 Our group focuses in two major research areas related to energy storage technologies. First, we study the synthesis and characterization of heterogeneous meso-architectures utilizing electrochemistry to both create them and investigate their application to energy storage devices, such as Li-ion batteries and beyond-Li-ion technology. We are currently investigating lithium-sulfur and magnesium batteries in addition to solid-state lithium ion battery chemistries.

Second, we are able to investigate fundamental physical and chemical properties of porous nanostructured materials, such as anodized aluminum oxide (AAO), whose structure we can precisely control by creating them in our lab. We can use this AAO to study diffusion phenomena and reactions in confined meso-architectures and further investigate how structure can affect battery performance, such as energy and power density, and also possible degradation mechanisms in these new architectures.

We have previously studied new electrochemical growth mechanisms of the conductive polymer nanotubes and metal nanotubes in cylindrical pores of a template. Using poly(ethylenedioxythiophene) (PEDOT) nanotubes, we have demonstrated the world-first moving-image speed in the electrochromic device with high optical color contrast, which has never been achieved simultaneously before.